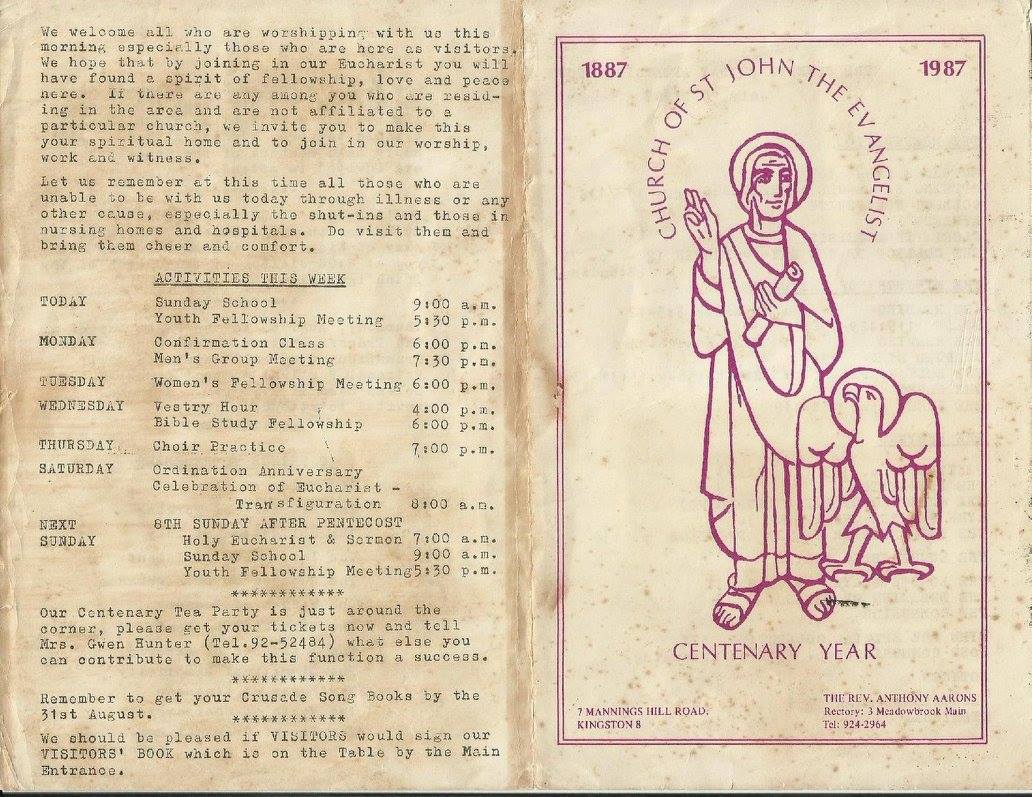 Called St. John’s Swallowfield in the 19th Century; began in 1878 as a Mission Station, under the umbrella of the St. Andrew Parish Church. The Mission, a wooden building located at 7 Mannings Hill Road served the community as a School and Chapel ( the twin pillars of  Jamaican life then-  education and religion ) . The building was totally destroyed by a hurricane in 1886. A temporary structure was erected by the men (tradesmen and labourers) connected to the Mission within a fortnight.  Those who could contributed financially despite the fact that they themselves were “suffering under grevious personal loss”. The material on hand from the razed building was put to use.

The spirit of determination of the members made them “eager with labour and stone, to do all that in their power lies to replace the wooden by a more substantial building”. This   resulted in a stone structure being erected in 1887, the cost having been met mainly by a grant from the  Society for Promoting Christian Knowledge ( S.P.C.K. ).

The School, now called The Swallowfield School (located on White Hall Avenue) was separated about the middle of the 20th Century; it no longer forms a part of the SJE community. However, on-going efforts are made to maintain a working relationship because of the historical significance.

While no date could be identified as to when SJE became a “settled congregation”, it is assumed that this took place during the period of separation with the School. There is a burial ground, consecrated in 1914, and a Church Hall, built in 1983.

The members of SJE in the 21st Century continue with the same “eager determination, participation and will to survive” which prevailed in 19th Century.

Source: Information taken from Gleaner article of Sept. 1987 “The Church of St. John The Evangelist is really 109 years”

St John Back Then – Images from the personal collection of our church brother CN Powell.

Currently the church is apart of the Meadowbrook Merrivale cure, along with our sister Church of Transfiguration and Mission of St Martin of Tours.