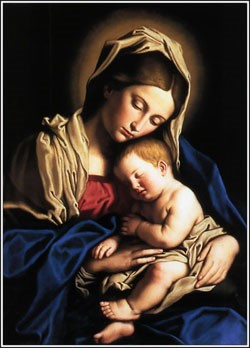 On Monday we celebrate the Feast of the Blessed Virgin Mary.  I share with you from the Catholic Website on “Mary”

Mary, also known as St. Mary the Virgin, the Blessed Virgin Mary, Saint Mary, Mary Mother of God or the Virgin Mary is believed by many to be the greatest of all Christian saints. The Virgin Mother “was, after her Son, exalted by divine grace above all angels and men.”

Mary’s life and role in the history of salvation is foreshadowed in the Old Testament, while the events of her life are recorded in the New Testament. Traditionally, she was declared the daughter of Sts. Joachim and Anne. Born in Jerusalem, Mary was presented in the Temple and took a vow of virginity. Living in Nazareth, Mary was visited by the archangel Gabriel, who announced to her that she would become the Mother of Jesus, by the Holy Spirit.

She became betrothed to St. Joseph and went to visit her cousin, Elizabeth, who was bearing St. John the Baptist. Acknowledged by Elizabeth as the Mother of God, Mary intoned the Magnificat.

When Emperor Augustus declared a census throughout the vast Roman Empire, Mary and St. Joseph went to Bethlehem, his city of lineage, as he belonged to the House of David. There Mary gave birth to Jesus and was visited by the Three Kings.

Mary and Joseph presented Jesus in the Temple, where St. Simeon rejoiced and Mary received word of sorrows to come later. Warned to flee, St. Joseph and Mary went to Egypt to escape the wrath of King Herod. They remained in Egypt until King Herod died and then returned to Nazareth.

Nothing is known of Mary’s life during the next years except for a visit to the Temple of Jerusalem, at which time Mary and Joseph sought the young Jesus, who was in the Temple with the learned elders.

The first recorded miracle of Jesus was performed at a wedding in Cana, and Mary was instrumental in calling Christ’s attention to the need. Mary was present at the Crucifixion in Jerusalem, and there she was given into John the Apostle’s care. She was also with the disciples in the days before the Pentecost, and it is believed that she was present at the resurrection and Ascension.

No scriptural reference concerns Mary’s last years on earth. According to tradition, she went to Ephesus, where she experienced her “dormition.” Another tradition states that she remained in Jerusalem. The belief that Mary’s body was assumed into heaven is one of the oldest traditions of the Catholic Church.