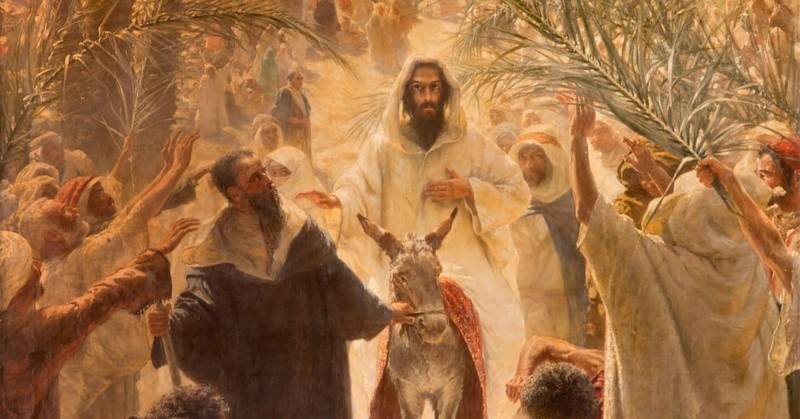 It is a time of despair, perplexity and contradiction. The very people who applaud Christ’s entrance into Jerusalem that morning, shouting out “Hosanna” and words of adoration will, within a week, be crying, “Crucify Him.” They will go from acclaiming Him as the new King of Israel to urging His life be traded in favor of a convicted criminal; they will first praise Him and then mock Him. Even friends entering Jerusalem at His side will desert Jesus. All this discord will take place during one week beginning on what we call Palm Sunday.

As we read in the Gospels, Jesus went to Jerusalem to join with throngs of other Jews to celebrate the Passover feast as had been prescribed in the Old Testament books of Exodus and Deuteronomy. According to the Gospel of St. John, Jesus and many of his followers journeyed the less than two miles from Bethany on that Sunday, arriving outside Jerusalem. As was the custom, pilgrims that had already arrived in the city went out to greet newly arriving groups; some had never seen Jesus but had heard about the miracles attributed to Him and were caught up in the excitement.

Those arriving with and greeting Jesus were large in number as explained by John’s Gospel: “When the great crowd … heard that Jesus was coming to Jerusalem, they took palm branches and went out to meet him, and cried out: ‘Hosanna! / Blessed is he who comes in the name of the Lord, [even] the king of Israel’” (12:12-13).

Riding on the borrowed donkey, Jesus made His humble entrance into the city while the crowds were scattering their garments before Him and waving their palm branches. This joyful scene belies the traitorous acts, sorrow and agony that will soon follow, belies that this triumphant hero will be crucified like a criminal.

St. Bernard of Clairvaux (1090-1153) offered a homily about Christ’s entry into Jerusalem: “How different the cries, ‘Away with him, away with him, crucify him,’ and then, ‘Blessed is he who comes in the name of the Lord, hosanna, in the highest!’ How different the cries are that now are calling him ‘King of Israel’ and then in a few days’ time will be saying, ‘We have no king but Caesar!’ What a contrast between the green branches and the cross, between the flowers and the thorns! Before they were offering their own clothes for him to walk upon, and so soon afterwards they are stripping him of his, and casting lots upon them.”