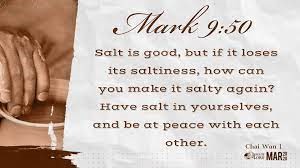 “Teacher,” said John, ‘we saw a man driving out demons in your name and we told him to stop, because he was not one of us.’” No one knew the man whom John was talking about. But there are several things about him which we may be certain of. For example, he believed in Jesus. He held Jesus’ name in honor. He believed that Jesus’ name was above all other names in heaven and on earth. He must have been a man of compassion because he felt compelled to help those who are being troubled by demons. We can say that he was imitating Jesus’ ministry to help the helpless. In order to do that, he must have sacrificed many things in order to devote himself to serving those in need. We do not know who he is, or why he did what he did. But there is no doubt that what he was doing wasn’t evil. Actually, it was Good! He was not one of Jesus’ disciples. He wasn’t familiar with the intimate teachings of our Lord. But he was certainly a precious soul with potential— a great potential— to grow as a disciple of Jesus.

Why then did John and the others feel as if they needed to stop him. They said its because “he’s not one of us.” Who gave them the authority to determine who should or should not serve Jesus— whether it was in casting out demons or in preaching the gospel? But they felt privileged because Jesus personally called them! They thought they were better and more precious than everyone else. Jesus’ surely privileged them! But that privilege or grace should have made them humble men— actually the most humble of men. Jesus’ privilege or grace to them should have made them look at everyone else as next in line to receive Jesus’ grace. But, they were acting as if they were the only ones worthy to serve Jesus and his gospel. When they saw this man casting out a demon from a suffering person, they should have praised God for the man’s faith. They should have been glad that Jesus’ teaching and influence had already begun to take root in people’s hearts. Then they should have welcomed the man as one of them. But when they saw him casting out demons, they criticized him. They stopped him. Then they boasted to Jesus that they had stopped someone from doing the work of God in Jesus’ name!

And they waited to be patted on the back for what they did. What did Jesus say to them? Read verses 39-41. “’Do not stop him,’ Jesus said. ‘No one who does a miracle in my name can in the next moment say anything bad about me, for whoever is not against us is for us. I tell you the truth, anyone who gives you a cup of water in my name because you belong to Christ will certainly not lose his reward.’” What they did wasn’t right. They had not recognized the hand of God working through another person. They had not looked at the man with eyes of faith, but with their own shortsighted human eyes; and they had condemned him. They should have been a good influence on the man! What does that mean? It means they should have encouraged his faith to grow; they should have drawn him nearer to Jesus. It is that part of us that causes another person to stumble because “he is not like us”. Bad influence is to be so blinded by God’s personal grace in our life that we cannot see the grace of God in another. But good influence! Good influence is when we humble ourselves and serve another because he or she belongs to Christ. We can do that, when we can see that special and wondrous grace of God in another’s life.