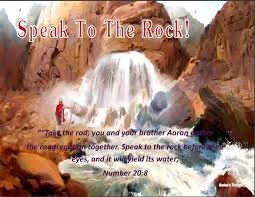 “Take the staff, and you and your brother Aaron gather the assembly together.  Speak to that rock before their eyes and it will poor out its water,  You will bring water out of the rock for the community so they and their livestock can drink.”  Numbers 20:8

Moses and the people have been travelling for days without water.  The people were thirsty.  They were complaining and grumbling about their plight, and Moses became the object of their complaining.  Moses sought the Lord for wisdom on how to handle the situation.  The Lord instructed him to speak to the rock and water would flow.  This would be a sign that God was still in control, that Moses was still the leader, and that God was their provider.

When it came to speak to the rock, Moses’ disgust with the people became so great that instead of speaking to the rock, he angrily addressed the people and then struck the rock twice.  The water came out, in spite of Moses’ disobedience.  But the Lord was not pleased with Moses.

This was a time for Moses to operate at a higher level.  No longer was he called to touch things with his staff to perform miracles;  it was a time for him to speak to the problem.  His very words would have changed the situation.  Moses’ staff represented two things – his physical work as a shepherd of sheep and his spiritual work as a shepherd of the people.  God was calling him to move into a new dimension of using his staff.  Up to now, Moses had always been commanded by God to touch something to perform the miracle.  Now it was time to speak God’s word to the problem.

However,  Moses made the mistake many of us make.  He used his instrument with force to accomplish something for God.  He took something God wanted to be used in a righteous manner and used it in an unrighteous manner.  He used force to solve the problem.  This disobedience cost Moses his right to see the Promised Land.

Have you ever been tempted to use your power, skill and ability to force a situation to happen, perhaps even out of anger?  God is calling us to use prayer to move the face of mountains.  The force of our ability is not satisfactory.  God is calling each of us to a new dimension of walking with Him.

Pray that God will give you the grace to wait on Him and not take matters into your own hands.  Then you will not be in jeopardy of failing to move ito the Promised Land in your life.