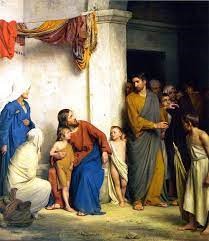 Jesus announces once again, in a briefer form than in Mark 8:31, what is to happen to him in the near future: “The Son of Man is to be betrayed into human hands, and they will kill him, and three days after being killed, he will rise again” (Mark 9:31). Yet the disciples still do not understand, and what is more, they are afraid to ask any questions (Mark 9:32). Perhaps they do not want to understand this confusing message about a Messiah who suffers and dies. Or perhaps they are afraid to reveal their ignorance. Maybe they remember the rebuke Peter received at Caesarea Philippi and want to avoid similar humiliation. In any case, their fear of asking any questions means that they stay in their state of ignorance and confusion.

Instead of asking questions of Jesus, the disciples turn to arguing with each other. When they arrive in Capernaum, Jesus asks what they were arguing about along the way. They are silent, too embarrassed to admit that they had been arguing with each other about who was the greatest among them. Jesus, of course, knows exactly what they have been discussing, and tries once again to teach them that the reign of God reverses the world’s ideas of “greatness.”

True greatness, Jesus says, is not to be above others, but to be least of all and servant of all. It is not to ascend the social ladder but rather descend it, taking the lowest place. It is not to seek the company of the powerful, but to welcome and care for those without status, such as the child that Jesus embraces and places before his disciples.

In any culture, children are vulnerable; they are dependent on others for their survival and well-being. In the ancient world, their vulnerability was magnified by the fact that they had no legal protection. A child had no status, no rights. A child certainly had nothing to offer anyone in terms of honor or status. But it is precisely these little ones with whom Jesus identifies. “Whoever welcomes one such child in my name welcomes me, and whoever welcomes me welcomes not me but the one who sent me” (Mark 9:37).

In this narrative, Jesus arrives proclaiming that the reign of God has come near, calling for repentance, healing diseases and disabilities, and forgiving sins. Throughout his ministry, he associates with the last and the least in society — Gentile women (Mark 7:24-30), bleeding women (Mark 5:24-34), lepers (Mark 1:40-45), raging demoniacs (Mark 5:1-20), tax collectors and other notorious “sinners” (Mark 1:13-17). He even welcomes and makes time for little children, much to the disciples’ consternation (Mark 10:13-16). The radical grace of God that Jesus proclaims and lives completely obliterates the world’s notions of greatness based on status, wealth, achievement, etc. Perhaps that is one reason we resist grace so much. It is much more appealing to be great on the world’s terms than on Jesus’ terms. Greatness on Jesus’ terms means being humble, lowly, and vulnerable as a child. Greatness on Jesus’ terms is risky; it can even get a person killed. But as Jesus teaches repeatedly, his way of greatness is also the path of life