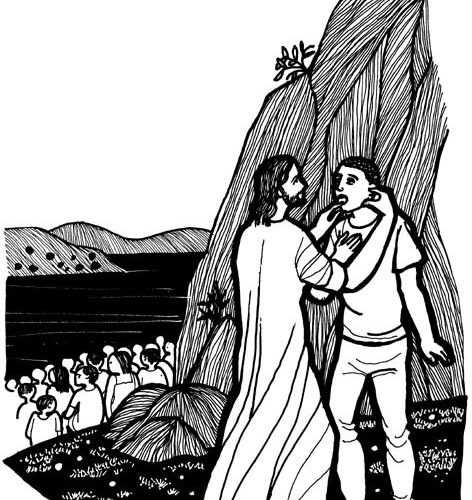 In last week’s gospel text, Jesus took to task the Pharisees and scribes for their ideas of “purity” and their judgment of those who did not conform to their standards of piety. Now, as if to prove his point, Jesus heads off into “impure” territory, the gentile region of Tyre.

It seems that Jesus is exhausted and seeking some “down time,” as he “entered a house and did not want anyone to know he was there. Yet he could not escape notice” (Mark 7:24). Even in this gentile region, it seems, word has spread about Jesus. He cannot escape demands for his healing power.

The woman who approaches Jesus breaks through every traditional barrier that should prevent her from doing so. She is “a Gentile, of Syrophoenician origin” (Mark 7:26). In other words, she is implicitly impure, one who lives outside of the land of Israel and outside of the law of Moses, a descendant of the ancient enemies of Israel. She is also a woman, unaccompanied by a husband or male relative, who initiates a conversation with a strange man — another taboo transgressed.

On top of all of this, her daughter is possessed by a demon. Although we are not told exactly how the demon affected her daughter, we can probably guess from other stories about demon-possessed people that it made her act in bizarre and anti-social ways. This woman and her daughter were not the kind of family most people would be likely to invite over for dinner.

Any way you look at it, this woman is an outsider. And what is more, Jesus actually has the nerve to say as much to her face. When the woman falls at his feet and begs him to heal her daughter, Jesus says, “Let the children be fed first, for it is not fair to take the children’s food and throw it to the dogs” (Mark 7:27). The “children” in this statement are the children of Israel, the “little dogs” (kunaria) are understood to be all other peoples.

Jesus’ response is harsh. How could he say such a thing? He appears to be quoting a bit of Jewish folk wisdom, but that does not lessen its sting. Some interpreters propose that Jesus is testing the woman to tease out her affirmation of faith. Others propose that here we see the very human side of Jesus, exhausted and needing a break, or perhaps not yet understanding the scope of his own mission.

While we cannot know exactly what Jesus was thinking, it is clear that when approached by the Syrophoenician woman, Jesus’ immediate response is to appeal to the limits of his mission, his call to serve his own people. In Matthew’s version of this story, Jesus begins by saying, “I was sent only to the lost sheep of the house of Israel” (Matthew 15:24).

When this tenacious mother comes back at him with her clever response, “Sir, even the little dogs under the table eat the children’s crumbs” (Markn7:28), Jesus can only agree. “For saying that, you may go, Jesus says. The demon has left your daughter” (Mark 7:29). Jesus can only agree that God’s love and healing power know no ethnic, political, or social boundaries. “So she went home, found the child lying on the bed, and the demon gone” (Mark 7:30).

From Tyre, Jesus heads off to the region of the Decapolis, also gentile territory. Perhaps he is still seeking to escape notice and to rest a bit, or perhaps he has a new vision of his mission beyond the borders of his home territory. In any case, once again escaping notice proves impossible. “They brought to him a deaf man who also had an impediment in his speech, and they begged him to lay his hand on him” (Mark 7:32).

Like the Syrophoenician woman, this man too is an outsider. He is cut off from the world by his inability to hear and communicate with others. This time Jesus does not hesitate to respond to a desperate request, though he does take the man aside, away from the crowd. In a very earthy scene, Jesus puts his fingers in the man’s ears, spits, and touches the man’s tongue, and then says “Ephphatha!” which in Aramaic means, “Be opened!” Immediately, the narrator tells us, “the man’s ears were opened and his tongue was released, and he spoke plainly” (Mark 7:35). Suddenly this man is able to hear and communicate with those around him. Not only is he physically healed, he is also restored to his community.